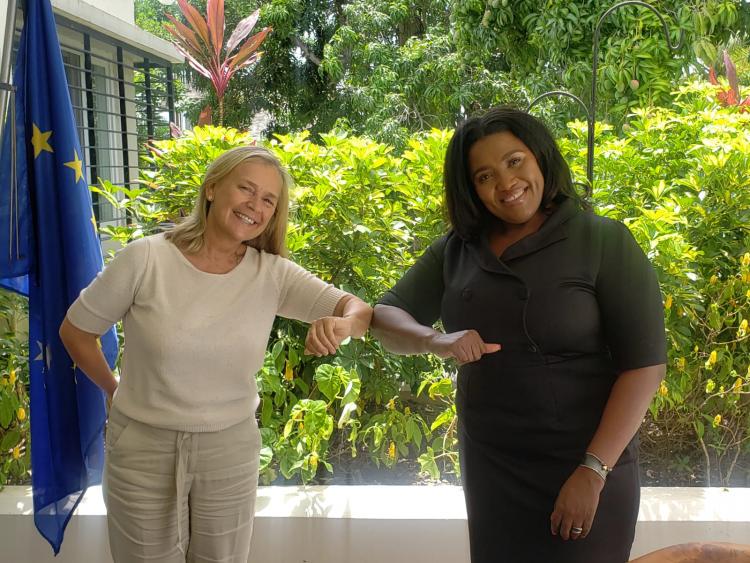 Are you considering applying for the EUVP visit? Ever wondered how the EUVP programmes are organised and what their outcomes are? Follow the “EUVP visit stories”, featuring unique reports and testimonials from those who have joined us at the heart of the EU! Today, we present you the article written by the Delegation of the European Union to Jamaica, Belize, Turks and Caicos Islands, Bahamas and the Cayman Islands, reporting on the virtual visit of Ms Kerensia Morisson, Member of Parliament of Jamaica.

As a Member of Parliament (MP) who represents a rural constituency with high levels of poverty, Kerensia Morrison is passionate about rural development. Ms Morrison, who participated virtually in the European Union Visitors Programme (EUVP) from July 12 – 16, 2021, used the opportunity to engage around this and other relevant themes when she met with like-minded leaders and decision makers from European institutions.

The first-time MP is eager to share ideas and learn from others about approaches that can effectively address some of the challenges facing rural communities that have been exacerbated by COVID-19.  In particular, she is concerned about how poor or no connectivity to the internet affects access to education for children in rural and deep-rural communities. She is eager to see these communities be given special attention in the Government’s prioritisation of digitalisation.

“I believe one of the best ways to change people’s lives is by impacting the conditions in which they live,” she revealed. “I am passionate about education, infrastructure development, light and water in rural communities, because these are the things that will connect them to their dreams,” Morrison pointed out.

As Jamaica seeks to manage the consequences of COVID-19, with an emphasis on building back better, Ms Morrison said it is critical to be in touch with where the world is going on important matters that affect us all.

She added that it is crucial to use the floor of Parliament to lobby for advancement on issues, including environmental protection, which is becoming increasingly important in Jamaica.

“It is about bringing that level of education and awareness to our people so that they can make the connection between climate change and the receding shorelines at Hellshire, for example,” she noted.

The European Union is looking to help Jamaica to be resilient in the area of climate change and to advance digitalisation and digital inclusion.
Ms Morrison expressed her commitment to work together with international development partners and non-governmental organisations to advance common interests and put Jamaica’s priority issues on the global agenda. Recognising that no country knows it all or has all the right answers, the MP asserted that the knowledge-sharing experience and the connections made during the EUVP study programme were invaluable.

“We embrace opportunities where we are able to say to our friends in the EU, ‘what’s your policy on climate change, on education in the rural communities, do you have any templates to share?’ These partnerships are lifelong and invaluable and I intend to make full use of them.”

The EUVP is an initiative of the European Parliament and the European Commission that invites promising young leaders and opinion shapers from countries outside the European Union to visit EU institutions to gain a first-hand appreciation of the EU and how it works.

Kerensia Morrison is MP for North East St Catherine. She won the seat in the September 2020 general election. Prior to that, from 2016 – 2020, she served as a Government Senator for the ruling Jamaica Labour Party.

This article was first published by the EU Delegation to Jamaica, Belize, Turks and Caicos Islands, Bahamas and the Cayman Islands.