Ms Klympush-Tsintsadze began her career in 1993 year as a Project Manager at the Ukrainian Center for Independent Political Research (UCIPR) in Kyiv and later became the Head of the Department of International Relations in UCIPR. From 1998 to 2002, she worked for the East-West Institute’s Kyiv Center (EWI KC) as a Project Manager and for one year carried out the responsibilities of EWI KC’s Acting Director. For 5 years (2002-2007) Ivanna was the Radio BBC Ukrainian Service correspondent in the USA (Washington D.C.) and in the Caucasus (Tbilisi). Since October 2007, Ivanna worked as a Deputy Director of Programs, and later – as a Director of the International Charity Organization “Open Ukraine Foundation”. Since mid-2011 Ivanna was heading the Yalta European Strategy - an independent international network promoting the development of fair, democratic and prosperous Ukraine and supporting reforms necessary for Ukraine’s European integration. 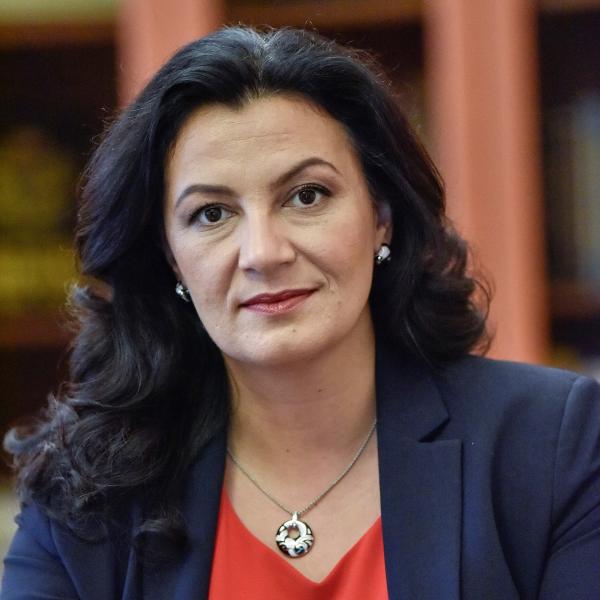 I would never have imagined that my participation in the EUVP Visitors’ Programme back in 2008 and the experience, knowledge and meetings that I had, would be of such importance to me some eight years later when I entered politics in the wave of the Revolution of Dignity in 2014. At the time, I had no idea that I would be using these contacts as an MP and later as the Deputy Prime Minister of Euro-Atlantic and European Integration.

EU is today Ukraine’s first trading partner, something which seemed impossible back in 2008. Every single day we get closer to the strategic goal of EU membership. Of paramount importance to us has been that EU membership and NATO membership is now enshrined in the Ukrainian Constitution since 2019.

The VISA-free travel with the EU is a huge step forward to accomplish one of the four basic freedoms, namely the Freedom of Movement, one of the founding principles in the EU. I am looking forward to our citizens fully exploiting this potential once the end of COVID pandemic gives us the possibility to travel freely again. This also opens up for Ukraine adopting and integrating other EU basic freedoms that will eventually lead us to become fully-fledged member of the EU.

The sovereignty and independence of Ukraine is beyond any question for the EU and the comprehensive Association Agreement (signed and ratified by Ukraine in 2014 and entered into force on 01.09.2017 after all EU countries ratified it with their national authorities) is a proof of the ever-closer ties between Ukraine and the EU. The level of EU’s assistance both direct and micro-financial to Ukraine during these past difficult years, clearly shows EU’s direct support to Ukraine’s reform agenda.

My greatest achievement as an elected politician

I was very privileged to be elected to the Verkkovna Rada (Ukrainian Parliament) in 2014. Those who decided to join politics from the non-governmental community, like myself, following the Revolution of Dignity (2014) all have achieved something important.

As newly elected politicians of the post-2014 revolution, we faced a huge number of challenges. A coalition government was put in place and we came up with a very ambitious reform agenda. At the time, we faced a twofold dire situation: the Russian Federation’s attack on the integrity of our country by annexing Crimea and the war in the Donbass region on the one hand, and on the other hand saving Ukraine from state bankruptcy. This required a whole range of somewhat unpopular and quite difficult decisions. Being part of taking these far-reaching decisions on the future of Ukraine, and succeeding in explaining the reasons for why the reforms were needed, I truly believe that is the greatest achievement my peers and myself in the Parliament did.

Another major achievement I would like to emphasise is the work we did in the Foreign Affairs Committee. During the time when I occupied the post of the first Deputy Chair, a major part of our work was concentrated on explaining to our partners in the EU and other liberal democracies around the world what was actually happening in order to break the Russian narrative about the Crimea annexation and the war in the Eastern part of Ukraine. I believe we have fully succeeded in this mission by bringing to each and every Parliamentary Assembly in the free world our explanations and facts of what was happening and the real Russian aggression taking place; hence, breaking the Russian narrative of a so-called civil war on Ukrainian territory.

I did at that point chair the Ukrainian Delegation to the NATO Parliamentary Assembly, and I know that everyone actually saw the changes.

In my capacity as the then Deputy Prime Minister of Ukraine for European and Euro-Atlantic Integration (2016-2019), I am proud to be among those who led the institutional capacity building in Ukraine almost from scratch. For us to implement the already in 2014 signed and subsequently ratified Association Agreement with the EU required that we established an entirely new culture of coordination efforts, which is absolutely crucial for succeeding the integration process with the EU.

As what concerns this 9th parliamentary legislative term, I am proud that my peers and I, albeit belonging to the opposition, have managed to preserve the European Integration Committee whose existence has recently been threatened by the current ruling majority. Likewise, I have succeeded in preserving the post that I formerly occupied as the Deputy Prime Minister for Euro-Atlantic and European Integration; which I believe allows us to have this national mechanism of coordination and work on the continuous implementation of the Association Agreement with the EU.

“A journey of a thousand miles begins with a single step”. I chose to quote Laozi because this is exactly what we all need to remember when we have ambitious dreams and goals. Everything is possible if you only start to move towards the goal incrementally.

Another important point I would like to stress is that whatever position you are occupying the framework that defines your actions and what you strive for has to be about values. Values have to be your guiding point. The values allow and help you to move forward and keep you focused during times where you encounter resistance and challenges to your project.

As what regards the security situation, the EU has been gradually more supportive in our fight to restore our territorial integrity towards the overt aggression of the Russian Federation.

Even though the EU sanctions towards the Russian Federation in response to the annexation of Crimea in 2014 were largely insufficient at the time, the EU has subsequently taken a firmer stance. Russia’s attack on Ukraine means waging a war on one of its strategic partners, and is a violation of the Budapest Memorandum (1994) by which Russia together with the UK and the US assured to uphold the territorial integrity of Ukraine, Belarus and Kazakhstan in connection with our adherence to the Treaty of Non-Proliferation of Nuclear Weapons.

Since 2014, there has been a growing understanding in the EU of what kind of threat Russia’s policies pose to the stability in the Region and to the EU itself. The security threat is not exclusively envisaging Ukraine, Russia is persistently and methodically working with the aim of destabilizing and sowing unrest in the free and democratic world through disinformation campaigns, cyber-attacks, operating subversive groups in territories of neighbouring countries, acting through media and through political parties and groups with extreme right or anti-democratic agendas in the EU and elsewhere.  Russia’s actions constitute a common challenge to all of us.

What is the key to closer relations between Ukraine and the EU?

I think it is pretty simple: For Ukraine it is about not deviating from the path we are currently on; about mobilizing the executive, legislative and judicial powers and the NGOs to continue our ambitious reform agenda that was set back in 2014. We need to finalize the work on this, not only as what regards the Association Agreement with the EU, but also on subjects not necessarily foreseen in the Association Agreement.

As for the EU, it requires courage to finally admit that there is a European perspective for Ukraine and to adopt a similar position and approach to Ukraine as is the case for the Western Balkans. Moreover, the EU should adopt a widening of the scope for enlargement towards not only Ukraine, but also the other countries in the Eastern Partnership Program who have clearly stated their ambition to join the EU.