Skip to main content
You should never stop believing in human rights, your ideals and principles.
Biography

Born in 1983 in the city of Temirtau, Central Kazakhstan, to an engineer and a doctor, Mr Chingiz Lepsibaev studied at the First School in Kazakhstan for gifted children (with a technical focus), then studied at the university as an engineer. He has worked as a leader in local, regional and national youth organizations. Moreover, he worked at the project of United Nations Development Programme (UNDP) and at the Structure of Ministry of Education. Since 2012 Mr Lepsibaev has been working on human rights. In 2016, he was appointed the Head of the office of the Ombudsman for the Rights of the Child. Since 2019 the Eurasian Expert Council Foundation, which Mr Lepsibaev heads, has been the largest NGO in Kazakhstan. 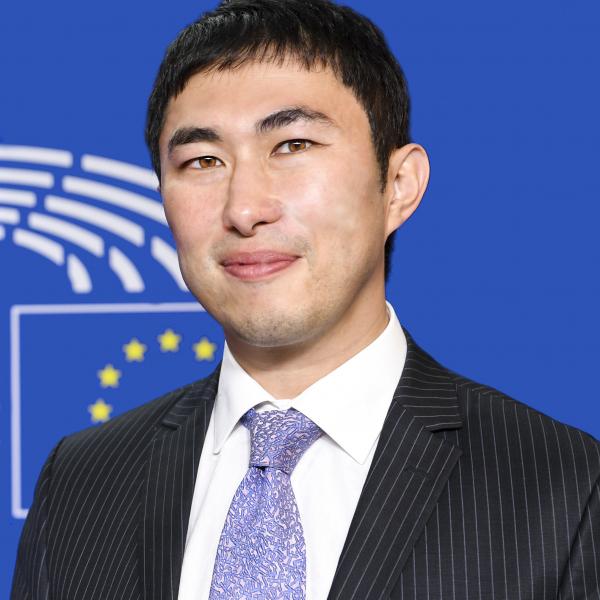 My EUVP visit to the EU institutions took place in 2017. Through the EUVP programme, I got acquainted with the principles of the EU's work with the civil society. I met with leading experts from the European Commission in charge of main social policies such as education, social protection and employment. Meetings were also organized with Members of the European Parliament who are actively working in these areas. Moreover, I was interested in the interaction of the EU institutions with the civil society and in the public control. The EUVP programme and the knowledge gained helped me understand the priorities in the development of similar work in Kazakhstan in terms of goals and tools. I consider this experience to be very important and invaluable.

What inspired your desire to work on behalf of furthering human rights?

I started working in the public sector in 2000 as a volunteer and then as a chairman of the student committee. Through this function I was actively involved in protecting the rights of students. In 2004-2006, I worked as the Director of the Regional Youth Association and in 2008-2009, in the "Congress of Youth of Kazakhstan". In 2013- 2015, I supervised the international direction closely related to the implementation of international obligations of the Republic of Kazakhstan, including in the field of human rights in the "Civil Alliance of Kazakhstan";. Since 2013, I have been a Member of the National Council for Human Rights (CSO DIHR), as well as the Commission on the Rule of Law in the Republic of Kazakhstan.

In my public work, I have been faced for many years with significant restrictions in the activities of many NGOs, which are caused by an insufficient level of transparency of state programs and projects, including in youth policy, NGOs, media policy and human rights activities. The dire situation forced us to use a number of mechanisms to ensure the legal rights of NGOs and citizens and to implement in the period 2011- 2016 a number of initiatives in this area.

In 2010, at the invitation of the Ministry of Culture and Information, I was part of a group of three experts working on NGO reporting standards and in 2010-2013, I was part of a group of experts implementing monitoring of projects of the state social order of the Ministry of Culture and Information of RK. This project was the first of its kind and laid the foundation for the transparency of the industry as a whole. In 2011, I personally submitted a series of requests to the Prosecutor's Office of the Karaganda region regarding competitions for NGOs in the region and the city of Temirtau. As a result, a decision was made regarding the competitions and a number of officials in the city and region were subjected to official penalties.

In 2011, within the framework of the initiative "Young Researchers" of the Soros Foundation Kazakhstan, I monitored the expenditure of funds in the implementation of youth policy in the Karaganda region. Our last initiative was “My Deputy” project, through which we have developed a mobile application - a mobile service to increase the submission of appeals from citizens to Members of Parliament and monitor responses to these appeals.

How did your experience with the EUVP contribute to your work?

Having studied during my EUVP visit the experience of EU Member States in the field of human rights, in particular the block of socio-economic rights, in 2019-2020 we began the implementation of the national human rights project “Qorgau”. In each of 209 districts of Kazakhstan, an office of free primary legal advice has been opened for the target group - citizens in difficult life situations. In just 2 years, 25 thousand consultations were provided and more than 500 citizens were protected in the courts. Moreover, the experience of the European Parliament and the analysis of the implementation of projects made it possible to amend a large number of legislative acts, including the law "On advocacy", "On the rights of the child" and others.

What are the current challenges to human rights that you wish to see overcome?

Currently, a huge number of Kazakhstan’s citizens are effectively cut off from the possibility to exercise their basic civil rights. The problem is the low legal literacy, as well as the lack of tools to protect their legal rights and tools aiming at addressing the cases of illegal actions by the authorities and the judiciary. We plan to continue to implement projects and ideas that will protect the rights of certain categories of citizens with a common mission - the development of civil society and increasing legal literacy and awareness of all citizens.

What would you say to (EUVP and global) young leaders trying to change and shape societies for the better?

You should never stop believing in human rights, your ideals and principles. It is always necessary to work to improve your competencies and capabilities, as well as the potential of your team. Any bad government, corruption and tribalism will not withstand the competition of time with professionalism, multiplied by the ability to work with public opinion.

The interview took place in February 2021